Aha! At last we can finally answer the question, why doesn’t the click type segment reported mobile click to call clicks match up to the dimensions tab reported received calls.

It has been such an issue of confusion and frustration for so long, and we were all left to assume why these anomalies occurred. (My observations on the matter) We don’t have to assume anymore now we can know, and knowing is half the battle!

The problem had always been knowing whether or not the reported click to call clicks actually resulted in intentional, completed phone calls.

Now we can see, in the campaigns tab, using the click type segment how many reported received calls occurred from both mobile devices, and manually dialed phone calls. 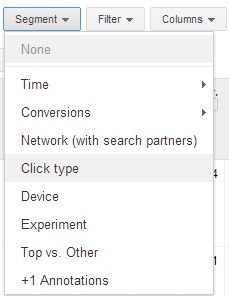 As you can see, there is still a large discrepancy between click to call clicks, and the number of actually received calls. This is something that we always assumed was happening – Not all users who clicked the click to call button were actually interested in making a call – But now we know for sure how many of those click to call clicks were intended , completed phone calls, without having to go back and forth between the click type segment and the dimensions tab. What’s even worse, is the dimensions tab doesn’t give you any totals, so you have to manually add those totals (what a pain).

We have all been waiting, wondering, and hoping for the day when this would happen, and now that day has come! Since there is not yet any announcement on Inside AdWords I assume that this segment may not yet be available to all. Keep an eye out, double check your click type segment, and when an update from AdWords comes out, I will certainly post it here. One thing I’m certain about is that this is a huge improvement!