I recently had a very interesting conversation with Tommy Sands of Philly Marketing Labs, (who is an AdWords Community Top Contributor), as to what does or does not constitute a violation of AdWords double serving ads policy. A user cited a specific example that I would like to expand upon here. To be clear, Tom being the professional he is, did not insinuate that he had a right or wrong answer to the question. However, I think given this specific example, perhaps we can come to a greater understanding of what is or is not a violation of the policy here.

First of all, the policy itself is not very specific. You would expect this, given the nature of legal-ese, as it applies to official Google policy. The gist of the policy is that no advertiser/business/site can show more than one ad per page of the Google search results. The question which sparked the conversation is what constitutes a single advertiser/business/site/company, when a large parent company owns multiple subsidiaries? The specific example is the Experian corporation, and it’s subsidiaries Free Credit Report, and Free Credit Score. 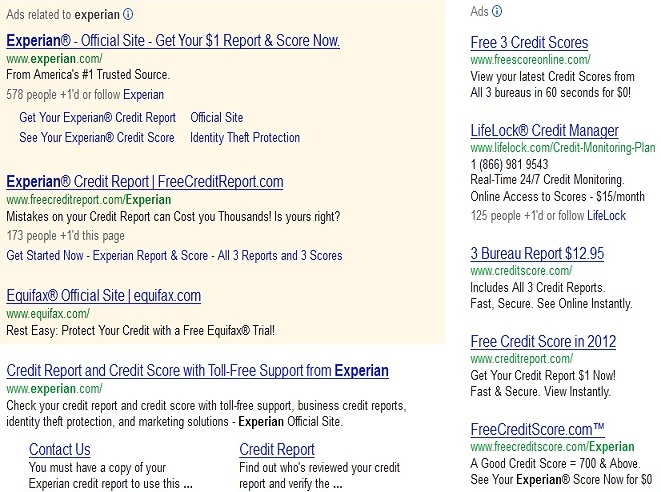 As you can see in the above example, all three properties are showing an ad on the same page, at the same time for the keyword query ‘expierian’. At first, I assumed that these were three (initially only two were the topic of discussion) completely different entities, wholly owned and operated independently. The fact that Free Credit Report was using the Experian trademark in the headline, seemed to me to be analogous to (for example) a Ford dealership having permission to use the trademarked name Ford in it’s ad headline, as a distributor of the manufacturers product. If Experian generates one of the credit reports used for the reporting service, then it would make sense that an authorized distributor of their product would have permission to use the trademark. However, Tom quickly pointed out that NO, in fact Free Credit Report is a listed subsidiary of Experian inc. So, the question remains – “Why is this NOT a violation of AdWords double serving ads policy”?

I am of the opinion that the parent/subsidiary legal structure of incorporation at this level, is the reason why this is NOT a violation of the policy. It is not a case of Google favoring “the big guys” over everyone else, it is a matter of “the big guys” having a different set of rules in general. For example, if we had a site for Tom Hale, Tom Hale, Jr., and Thomas Creek Concepts all showing an ad for the keyword term ‘Tom Hale’ on the same page at the same time, that would most definitely be a violation of the policy. TCC is not a publicly traded company, all three properties would be privately owned by one (or in this case two) private individual(s). There is definitely a case for “common ownership” with a non-public entity. Arguably, as soon as shareholders are involved with each property/subsidiary, “common ownership” becomes less of a clear cut case. One could argue that a single shareholder having interest in more than one entity could constitute “common ownership”, but if that were the case, anyone invested in a mutual fund with a 401K or IRA could be placed in that category as well. If you own a coffee shop, but your mutual fund invests in Starbucks stock, does that constitute “common ownership”? Would you then be violating the double serving policy by advertising your business with AdWords?

By now some of you may be saying to yourself  “You still haven’t proven to me that Google is not being evil by allowing a large company to do what a smaller company can not”. Well, if Google is evil for doing so, then what about Bing? The only difference is that Bing has one less ad above the fold on the first page, with all three Experian properties showing ads. Arguably, Bing is even evil-er than Google because there is one less potential competitor for “the big guy” shown in their search results. 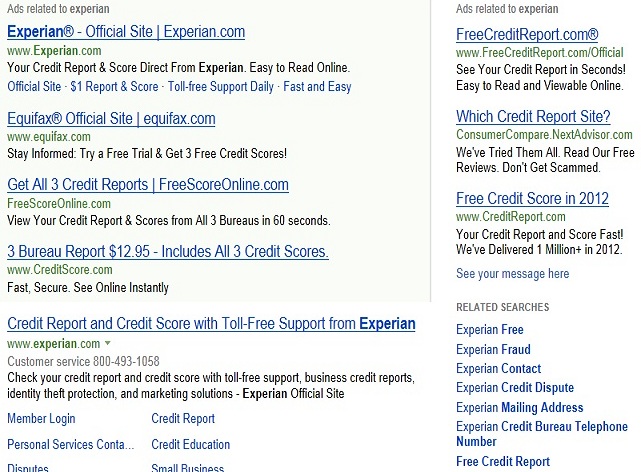 As small business owners, or employees of small business owners – Yes, it’s frustrating that the largest, wealthiest, most powerful people and companies in the world have so many advantages over the little guy. BUT – That is a reality of the world we have created for ourselves which existed long before any of us were alive, let alone before Google, Bing, or even Experian ever existed. I am not the dalai lama, I don’t believe there is anything wrong with being frustrated and venting those frustrations to anyone who will listen. 🙂 Sometimes we all just need to get it out, and know that we are not alone in this world. However, when it comes to advertising, and competing with the big guys in business, Venting alone isn’t going to help solve the real problem, or address the real concerns for a small business owner.

The answer to the real question at hand “how do I compete with the big guys”, is simple: Don’t! The tactics and strategies they use are because of, and rely on the fact that they are so big. Sure, we would all like to eventually gain those same resources and opportunities, but reality is what it is. Don’t play by your opponents rules and try to beat them at their own game – Be smarter, more fluid, and out work to out flank, and out maneuver them. While they are busy “winning” the game they want to play, focus your efforts on winning the game you want to play. Growing and expanding your business by reaching out to new customers, and retaining your current customers business for a lifetime! They don’t care about one customer as much as you do, because they have so many. Don’t worry about how many ads they have on the same page (between parent companies and their subsidiaries), worry about making sure you have one ad, that speaks directly to that one, unique, individual user, and speak directly to them. That’s the game you should be playing, because that’s the game you can win! 🙂

Why AdWords is more than just paid search