Let’s look at a couple of examples. Here are some phone impression stats for the first eleven days of July, from four adgroups in a single campaign: 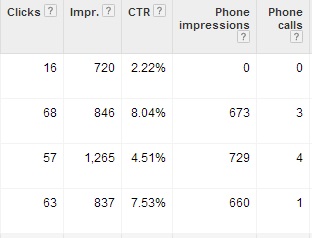 Here are those same adgroups in the same order for the previous 30 days: 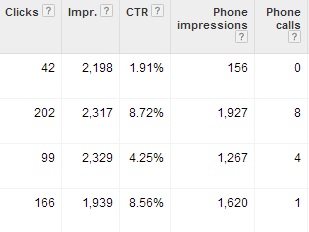 All the adgroups are over the minimum click threshold, yet for some reason phone impressions for Google forwarding numbers simply ceased accruing. So what happened? Ah… Once again Google has changed their help documentation, and with it, apparently their policies. It used to be clear and direct – A minimum of 25 clicks within a 30 day period. Now the documentation reads:

Pretty ambiguous right? What is that minimum? Is it dependent on network? Do those clicks have to be on Google search network only or are Google search partners included in that minimum? But, clicks alone may not be all there is to it. Here is an excerpt from a Search Engine Land article by Ginny Marvin:

Unfortunately the documentation isn’t cited, so I can’t link to it here. Again though, I can’t help but wonder – If there is not only a minimum click threshold to get a Google forwarding number to show, but a minimum call threshold to continue to show a Google forwarding number – What is that minimum? Furthermore, with call minimums, what is the time frame in which you have to have that minimum number of calls – One week, one day? As you can see from the examples, the adgroup which ceased generating phone impressions didn’t have any reported phone calls during the last 30 days. Of course, you can’t generate any Google forwarding numbers calls without first accruing phone impressions.

Official Google documentation has never been great, but in some cases, it’s outright wrong. Take for example one of the “things to remember” from this Google help Doc. – “Call extensions with Google forwarding phone numbers currently don’t work on campaigns using CPA or automatic bidding.” It’s an old piece, but it was wrong when it was written and has never been updated. Google forwarding numbers did show when using CPA bidding, just not automated CPC bidding. So if you are using CPA bidding, and thought that maybe your bidding option was causing this problem with Google forwarding numbers – Think again. It seems as though the real problem is with this arbitrary, unknown minimum clicks, or minimum calls, or minimum clicks and calls within an arbitrary, unknown time frame.

Although we need and rely on the traffic and revenue Google generates, it’s getting harder every day to really like much about the way the big G handles information and disclosure nowadays. There has always been a need for honest accurate information, and I have tried to provide that here. However, more and more there are no honest or accurate answers because Google doesn’t seem to have any consistency to their policies or practices. I wish I knew what these minimums were, or what the reality of the situation actually is. The mantra from Google has always been that everything they do, they do to enhance the user experience. Please Google, just tell us what we need to do to “enhance user experience” when managing our AdWords accounts, and we will do just that!

How Many Phone Calls Did I Get From AdWords?

The Power of AdWords for Small Business